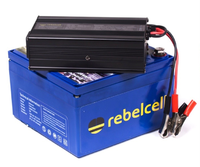 Rebelcell line - Lithium-Ion batteries, designed specifically for anglers and water sports. They are the drive for electric outboard motors, provide echosounders and electric multi-reels and, in addition, you can charge your smartphone etc. with an optional USB adapter pair.

Rebel Cell now has a large range of lithium ion battery sizes that can do a great deal: